Getting into the air – photo by Sue Mohler

The Bug Light Kite Festival occurs every year the third Saturday of May and what a beautiful day they had this year. It’s hosted by the South Portland Historical Society which has a small museum with free admission during the festival and a little store stocked with kites for those who might want to try their hand during the day. They some barbeque pits going for those who decided not to pack a lunch. 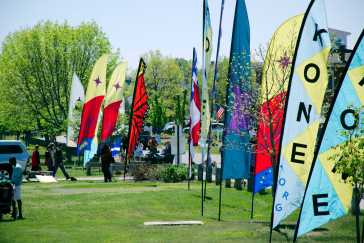 The spectacular kites are made possible by members of two different clubs: the Nor’Easters Kite Club; and Kites Over New England. I’ve included some pictures of just some of the kites making their appearance. We arrived and left early so I think we missed many of the afternoon special kites. The Octopus was enormous and hypnotic while others were colorful, graceful, whimsical, and even scary.

During the Festival, Bug Light is Opened and tours are hosted by the South Portland – Cape Elizabeth Rotary Club whose members maintain the lighthouse. It’s a small lighthouse only open to the public 4 times each year and only six people at the most can be up in the light at a time so be patient if you decide to go inside.

Some things to remember about the festival: Seating is limited so many folks bring chairs, blankets, and coolers; it can be cool in the wind even if the sun is out so bring a jacket, sweater, or sweatshirt; there are limited porta potties on site; parking is very limited in the park and is reserved for those with accessibility needs so you are asked to park about a quarter mile from the park in a large SMCC lot.

The wind usually cooperates at this park so there is every chance you will have fun and see lots of kites.

One thought on “Go Fly a Kite!”