This post is a bit of a side trip for me but I just had to get it out.  I took up sailing after moving to Maine and this, of course, necessitated a place to keep the boat during the season.  I ended up with a mooring which necessitated a dinghy.  So I purchased a dinghy, put it in the water late May, and used it all summer for the half mile trip out to the boat. At the end of the season I pulled the dinghy from the water and to my amazement found about an extra hundred pounds or so of sea creatures and plant life firmly attached to the bottom.  I had to use a power washer and about two hours of washing and scrubbing to clear the bottom. Then I had to bag the sea life and cart it to the transfer station where it could be composted.

Not wanting to repeat this in 2016 I asked around for a solution and some folks recommended paint for the bottom while others suggested that such paint was a horrible idea. Internet searches yielded the same result.  This spring I visited Hamilton Marine for various supplies necessary to commission the sailboat and asked about painting the bottom of the Zodiac. They suggested a quart can of Aquagard Waterbased Anti-fouling paint and told me it should work.  I decided to give it a try. 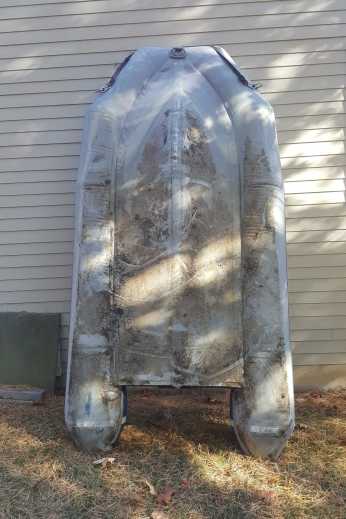 When I pulled the dinghy late October 2016 I was amazed. No barnacles or sea grass to be seen, just a light coating of slime to scrub off. While I don’t have pictures from 2015 these pictures show the bottom just after I brought it home this year and after about 10 minutes with a garden hose and sponge to clean it off.  It’s now ready for a coat of paint next spring. I think I have enough paint left from the quart I bought this year to do the job. If anyone asks, I will give a thumbs up to anti-fouling paint on a Zodiac. It worked for me.