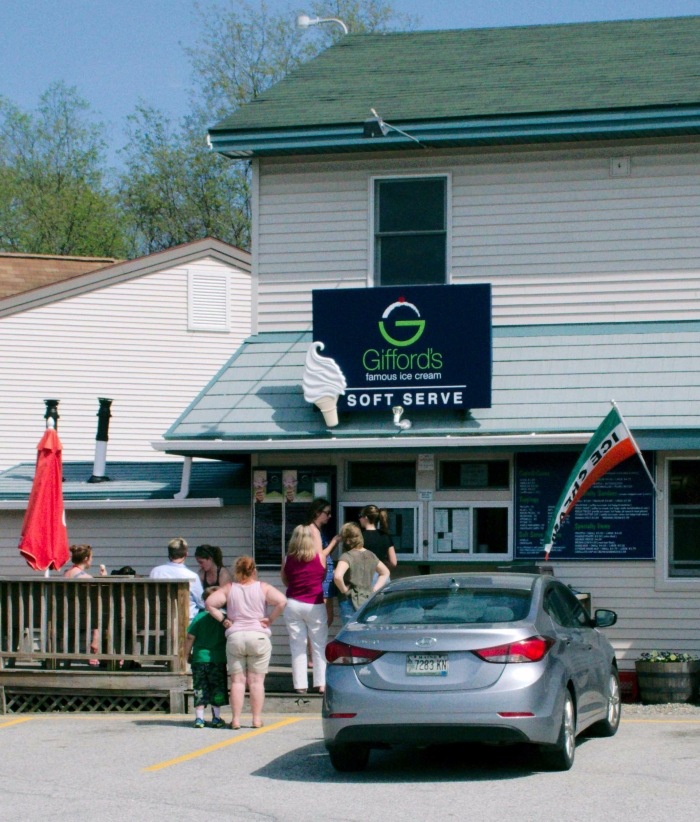 Sometimes I want ice cream. I know I shouldn’t but I do and I want hard serve, preferably Butter Pecan or something similar. Today was an ice cream day. The hottest day of 2017 by a long shot with the temperature topping 94° Fahrenheit so I headed for Toots a little west of Yarmouth, dragging my poor wife along, to satisfy the ice cream craving. Toots is a wonderful place to get ice cream where all the ingredients are locally sourced and the ice cream locally produced. Approaching Toots, I had misgivings because the parking lot was virtually deserted. This is never the case if it’s open but for some reason it was closed. What to do, what to do….

We headed back toward Yarmouth focused on a stop at Maple’s along highway one but it was nearly 3:00 pm and they closed for the day at 2:30. Even worse they crossed Gelato off their sign so maybe they aren’t even carrying it any more. OK, so let’s try Gifford’s just a couple hundred yards south of Maples on highway one. Their sign say’s Soft Serve and I guess I can live with that. It’s not my first choice but it’s someplace new to try. We pull in and join a short line. Despite the Soft Serve featured on the sign they had several flavors of hard serve including my favorite, Butter Pecan, and it was good.

Now that I know Gifford’s carries hard and soft serve ice cream they’re going on my list of places that can satisfy my occasional cravings this summer.