Monday, 2/13/17, winter storm Orson blew into New England. Here in Freeport, Maine it dropped about a foot and a half of snow. Other places may have received up to 3 feet but it’s a little hard to tell from the news because the meteorologists get so excited about extreme weather. No matter how deep the snow we all had to dig out.

The storm started Sunday night. The town got the snow plows out early to try to keep ahead of the build up on the roads. You feel the plows coming long before you see them. They are so big and heavy that vibrations start in the foundation of your home and travel up through your body as they approach and pass by. Sitting in your home at night reading or watch TV you might miss the start of the storm but the rumble of the plow that heralds the onset cannot be missed.

After the plowing large piles of snow block driveways and sidewalks and mailboxes are nearly obscured. Local companies provide snow removal services for homes and businesses and downtown snow is carted away by front end loaders to awaiting trucks that take it to a snow farm where it will linger, often until mid-summer.

After the big movers have done their job there is still the snow blower and shovels awaiting their tasks. The big stores like the LL Bean Flagship store keep the parking lots clear and the paths around their campus clean but a lot of it is done by hand and the folk doing the work most likely wear those signature LL Bean boots.

At my home I have to keep my driveway clear with the help of a local company; the walk to the front porch; a path to the propane and fuel oil tanks, and a clear area open to the bird feeders which provide an easy stop for woodpeckers, doves, blue jays and assorted other birds that live nearby year round. 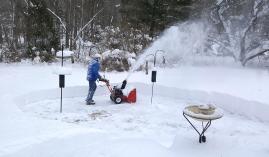 Digging out can seem to be a Sisyphean task.  Writing about the Greek myth Albert Camus noted:

The gods had condemned Sisyphus to ceaselessly rolling a rock to the top of a mountain, whence the stone would fall back of its own weight. They had thought with some reason that there is no more dreadful punishment than futile and hopeless labor.

But there is a difference. Living here you expect snow and moving snow is not a punishment but a task. We’ll do it again. But the labor is not hopeless. Each time we dig out we do so with the certain knowledge that winter is sure to end and we are one day closer to spring.

Three days after Orson passed through winter storm Pluto paid us a visit. It was much smaller dropping only 6 to 8 inches in our area but the snow was much heavier and wetter. Everything had to be done again but the snow was different and moisture seemed to hint of spring… maybe.